Jewish Ukraine: 5 facts about the Jews of Lugansk 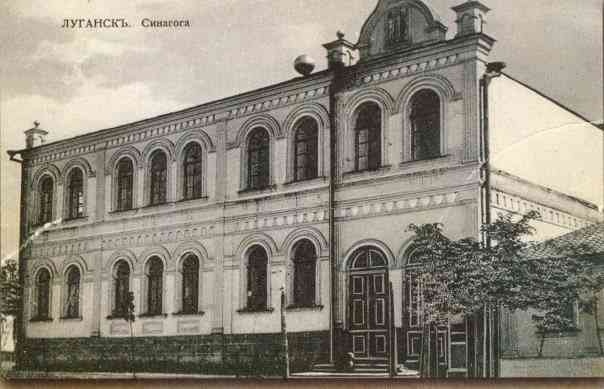 It’s hard to call Lugansk the most Jewish city in Ukraine – not so many famous Jews have come from here. And the Jewish community there was much more modest than in nearby Kharkov, let alone Dnepropetrovsk or Odessa, but nevertheless Lugansk also has its own Jewish history. The famous Israeli sculptor Feigin, the contemporary poet Alex Averbukh and many others have given Lugansk reason to be proud of its Jewish history, and everyone else reason to be proud of Lugansk.

1. Solomon Davidovich and the transfer of Turkish subjects

In 1797, soldiers of the routed Polish army were sent to build the Lugansk foundry – and they included the 35-year-old Solomon Davidovich. Evidently it was with him that the Jewish history of Lugansk began, an industrial town which grew out of the village built around the foundry in 1797.

The first reliable data of the demographic picture of the town where Jews were mentioned appeared in 1864. 156 Jews lived in Lugansk at that time. Around 30 years later, in 1897, there were 10 times as many Jews, 1,505 (and according to some sources 2,109). Before the revolution, the number of Jews increased by three times – to 4,554. 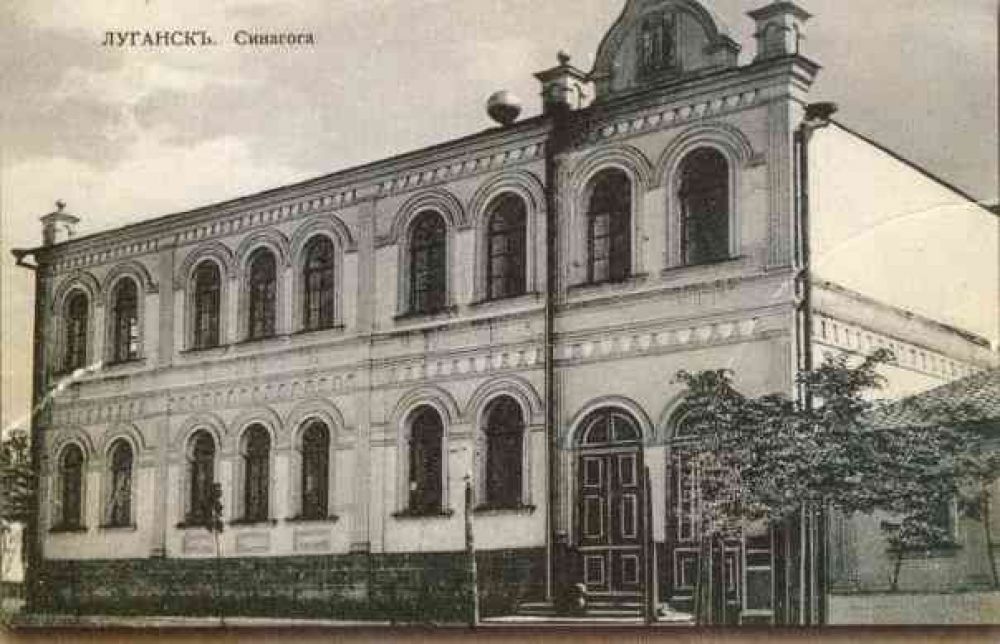 There is information that at the end of the 19th century there were many “Turkish subjects” in Lugansk – which meant Jews. And in the late 19th century many of them began converting to Christianity. In 1893 a certain “Turkish subject” Shmul Zalmanovich Vittenshtein was baptized – he converted to the Orthodox faith together with his wife and seven children. In many cases, the guarantor of the newly converted Christians in Lugansk was the local merchant S. Vasnev (it is possible that he was a converted Christian himself).

Dov Feigin (1907(8)–2000) was born in Lugansk into the family of a tailor, and received both religious and secular school education. In this difficult time for Ukraine, the Feigin family decided to move – and in 1920 they reached Gomel.

In Belarus, Feigin became interested in the ideas of Zionism with a mixture of left-wing beliefs – he became one of the participants of the youth movement that somewhat resembled the Jewish boy scouts, “Ha-shomer ha-tzair”, which prepared the young generation to move to Eretz-Israel and for life on a kibbutz. But Dov was more active than the new authorities desired. He talked too much and did too much – and in 1924 he was arrested. 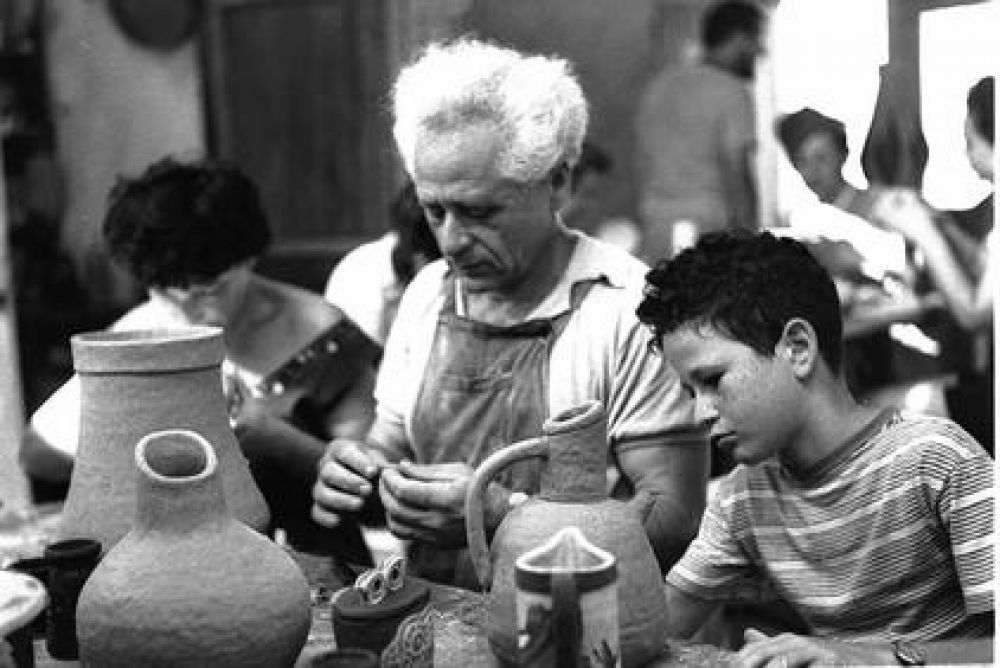 He was not released until three years later. Not wanting to tempt fate, Dov Feigin decided to leave the USSR, and in 1927 he moved to Eretz-Israel, becoming one of the founders of the Afikim kibbutz. But he did not want to be an ordinary farmer. Several years later, Feigin moved to Paris to study sculpture at the National School of Arts from 1933 to 1937, and after completing his studies he returned to Tel-Aviv.

Feigin spent the terrible years for the Jewish people in mandated Palestine, and in the year that Israel’s independence was declared, 1948, he joined the artistic group “New horizons”, which was founded by another Israeli modernist artist, Iosif Zaritsky from Borispol. 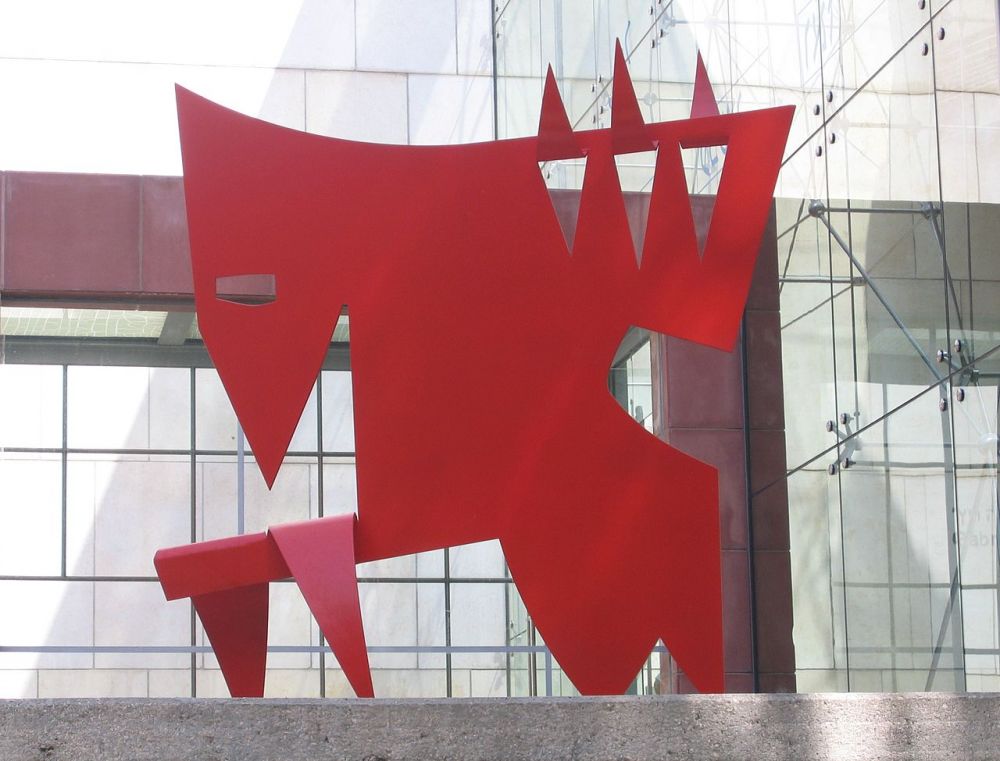 Dov Feigin moved to a freer style – his works of metal became increasingly spacious, allegorical and abstract. But this creative approach is what brought him popularity. In 1948 and 1962, Feigin took part in the Vienna biennale.
During his career as a sculptor he created many works including a memorial for John F. Kennedy (1966) on Mount Aminadav in Jerusalem, and also the bright red sculpture “The Animal” (1958, restored in 2008), which can be found in the park of sculpture of the Tel-Aviv art museum.

3. The father of the All-Ukrainian festival of children’s poetry

Iosif Borisovich Kurlat was born in Lugansk into a Jewish family, about which unfortunately nothing is known. The times were difficult, especially for Jewish children, and in those years going to the frontline was almost safer than staying at home. So when Kurlat turned 16, he joined the Soviet army as a volunteer, commanded a platoon, and after the war ended he became an apprentice metalworker at the Lugansk locomotive factory. 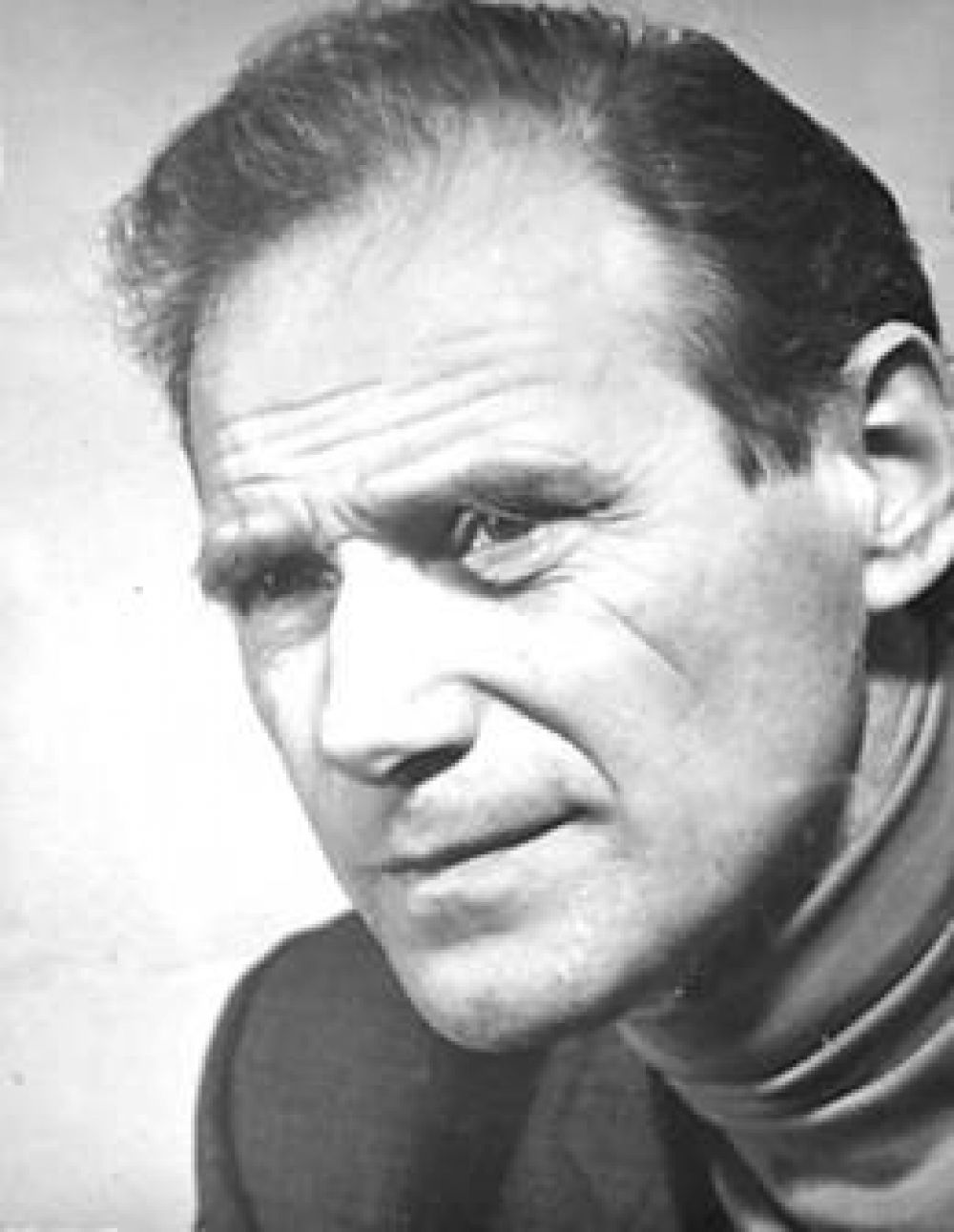 But he felt that a blue-collar job was not for him. After a time at the factory, he worked at a concrete factory for a while, then found a job as an English teacher and started working in the press. First he joined the editorial staff of newspapers in the Zaporozhe region and Donetsk, and then Kiev, and later became an editor on a television station in Donetsk, and graduated from the Gorky institute of literature of the USSR writers’ union.

During his studies, Iosif Kurlat met many people who would go on to define the era of the 1960s, with fellow students including Bella Akhmadulina and Yunna Morits. Kurlat also wrote poems and joined the general creative movement, but the authorities did not approve of his activity – the KGB sent him away from Moscow to Donetsk, and a few years later even further away, to Severodonetsk.

Kurlat worked for children and adults – his first poem was printed in 1950, and later he published over 50 collections of poetry. He not only wrote poems, but also books, including such novels as “Execution not Pardon”, and “Birch Stick” and also the short stories “Vitka’s Holidays”, “Everything Living on Earth” and others.

A member of the USSR union of writers and the national union of writers of Ukraine, Kurlat not only wrote himself, but also worked as a translator, adapting works in Ukrainian, Udmurt, Greek, Avar and other languages for a Russian-speaking audience. But today Kurlat’s name is not so much remembered for his works as for the fact that he founded the All-Ukrainian festival of children’s poetry.

Before the German occupation – in 1939 – 10,622 Jews lived in the city. According to official data, in the Lugansk Oblast 2,000 Jews were killed by the Nazi authorities (of course, this is an inexact figure, and in some sources the number of those killed reaches 3,000). Some Jews of the Lugansk Oblast escaped themselves, others were helped by local residents, and some were saved from death by… fascists.

The Yad Vashem museum has information about Benedetto de Beni, who was born in 1903 in the town of Gromo near Verona and in the summer of 1942 found himself with his unit, of which he was the captain, in Voroshilovgrad. After the occupation of the city, the Nazis sent all the Jews away to do hard labor – among them were two sisters, Sara and Rachel Turok. De Beni felt sympathy for them, and when he learned of the imminent extermination of the Jewish population, he found a way to warn them of the danger. Thanks to him, not only the sisters managed to escape, but also their parents, aunt, cousin and one of their friends. 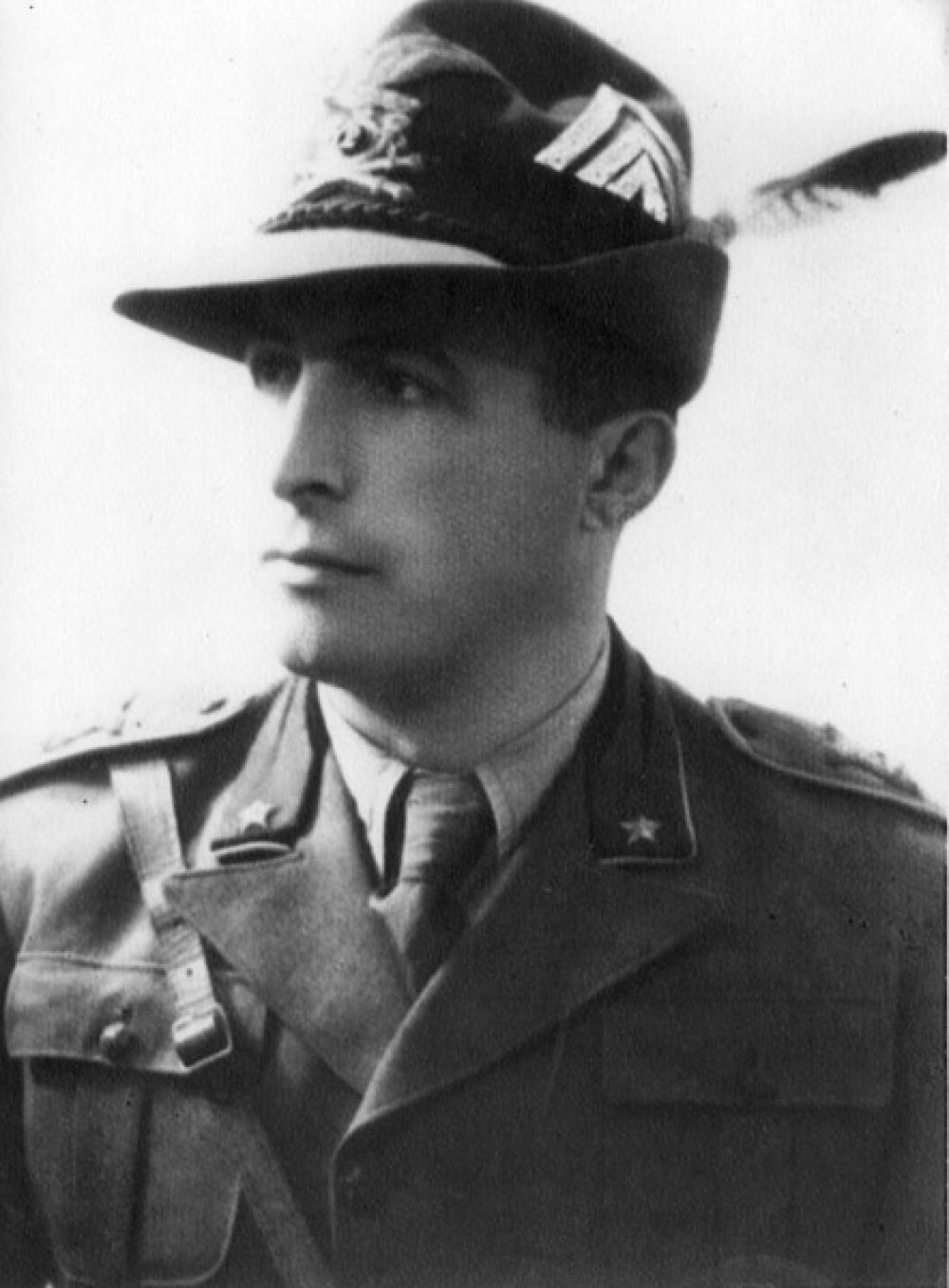 They all fled the town together and waited out the Holocaust – the girls later returned to Voroshilovgrad with Slavic names, and De Beni found them a job at the kitchen of the Italian military unit. Some time later, the captain sent them by train to Italy to stay with his wife, so the girls could hide in the provinces. Not without difficulty, the girls eventually reached Gromo. They lived in De Beni’s family, helped with the housework, and most importantly, they were now absolutely free. A year later, Sara reached Florence, and Rachel remained in her rescuer’s home until 1945 – but she never saw him again. Benedetto de Beni was held in a concentration camp until the end of the war, and when he returned to Italy, the girls had already gone home.

Rachel (whose married name was Shiryaeva) did not find Capitan De Beni’s until 50 years later, and visited him in Italy. She brought two trees with her from Israel and planted them by the school in Gromo, and the town authorities established a marble monument in honor of the captain.

The young Israeli poet Alexander Averbukh was born on 15 September 1985 in the Lugansk Oblast and in 2001 repatriated to Israel, settling in Tel-Aviv, and began to write poetry. In Israel he did military service and received higher education – he graduated with a master’s degree from the Jewish University in Jerusalem, and his works began to appear in print. The author’s Facebook page states that since 2015 he has been studying Slavonic languages and literature at the University of Toronto. 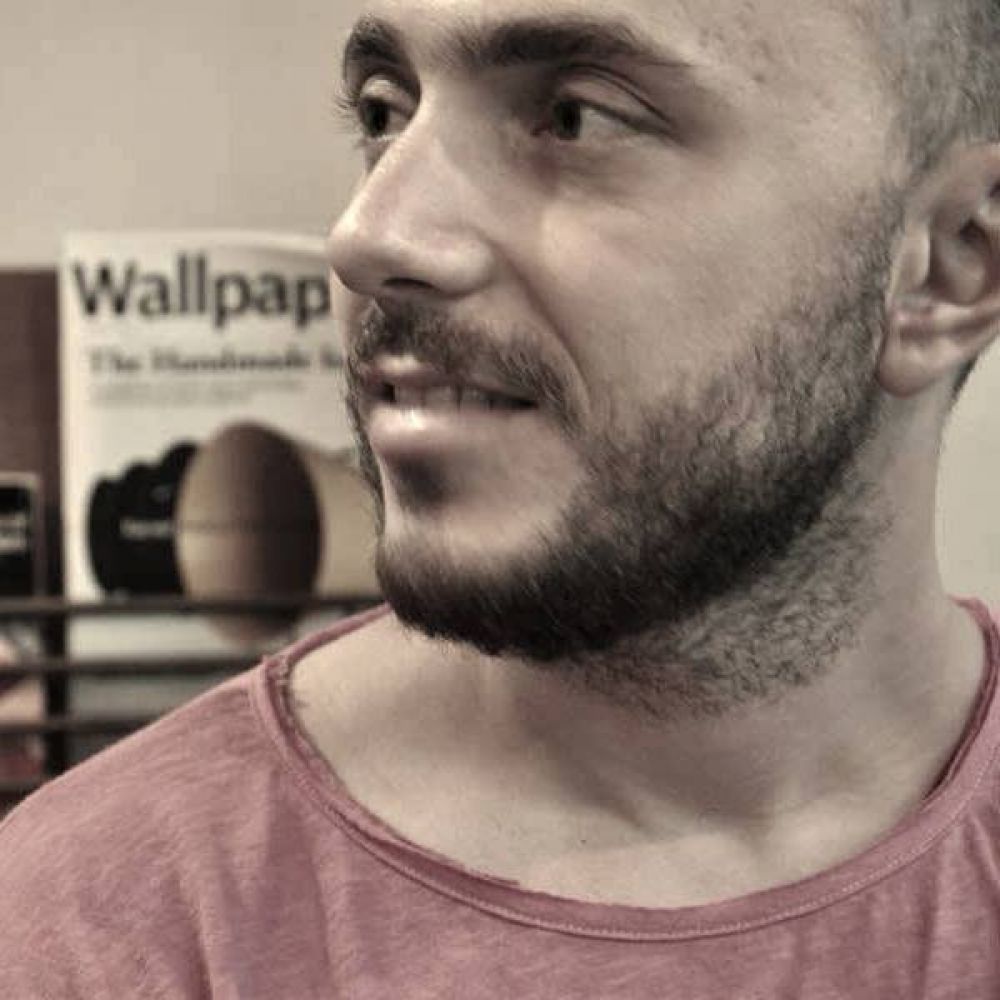 In 2006, Alexander made the short list of the “Debut” literary prize for new poets and writers, and in 2009 made the short list of the “LiteraturRRentgen” prize, and the long list of the “Russian prize”. In the same year, 2009, his first book of poetry, “Counterlight”, was published, where the topic of the army is touched upon, but it is hidden under symbols and tragic details. Averbukh also writes prose – but for his stories he also uses Hebrew as well as Russian.