We must write in big letters: THIS IS A PLACE OF EXECUTIONS 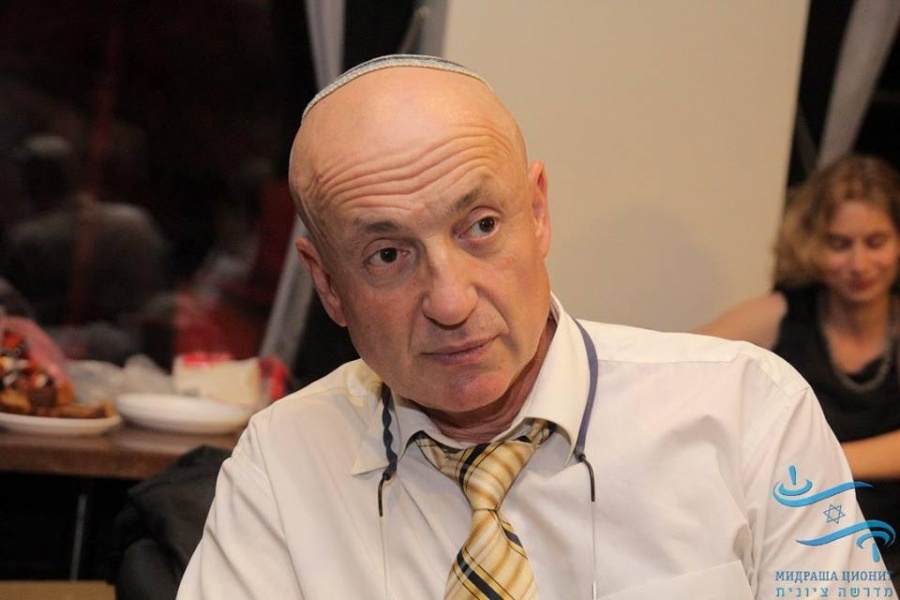 Anatoly Petrovich Shengait is the executive director of the Kiev Jewish community, and a member of the Coordinating council of the Jewish Conference of Ukraine.

How did the idea arise to found your organization?

It’s important to note that I’m not the first director of this organization. Furthermore, I didn’t found it. When this organization was founded, I was working as the head engineer of projects at a scientific research institute. It so happened that I staged a Purim Spiel at the Jewish school.

It was after this that fate brought me to the Jewish camp, and then I left my job and went to the Jewish school. It was a chain of events, and in the end I became the director of this organization.

The organization was founded at a period when the Jewish renaissance began, and the sign of this renaissance was the diversity and multi-faceted nature of Jewish structures which were founded when Ukraine became independent. There was a real boom, everyone wanted to do something and create something. Some organizations still exist successfully, while others are only left on the register of the Justice Ministry.

The very concept of a city community is a rather dubious definition, as the traditional Jewish community has always been formed around a synagogue. But the actual idea of creating a different association of Jews besides the traditional one is not new. It so happened that many organizations appeared that decided to represent the interests of Jews regardless of what religious structure they belonged to. Parallel to this, the idea arose to create communities of Jewish culture, and this process was led by Ilya Mikhailovich Levitas, and the city and Oblast communities were supported by VAAD in the person of Iosif Zisels.

In the end a structure of this kind was also created here. Our charter has not changed in all these years, we have only made additions to it. The first line of the charter states that we must assist the development of other Jewish organizations, whether they are youth, veteran or other associations of Jews. We have the task of being the incubator for Jewish initiatives. This is the flag under which the organization was founded.

You have witnessed the development of Jewish life in Kiev since independence. What has changed in the community over this time?

I will give you a simple example. Over many years, I’ve been attending the first day at school at one of the Jewish schools in the city, I still teach there sometimes. The children of our first pupils are now attending the school. This is a fundamental change, a qualitative change. It says a great deal about what is happening to the community now.
We are dealing with a new community, a community with an absolutely different face. There are changes connected with people leaving, and people returning who previously left. Additionally, a new generation has come along who knows a great deal about Jewishness, they have studied at Jewish schools, and spent time in Israel under the Masa program. These young people can explain what kapparot is and when to read a certain prayer.

The heads of Jewish organizations need to take these things into account, and meet the challenges of the time. It’s like a firm that sells goods and provides services, but doesn’t keep up with the market. Why are you still selling slide rules, when everyone works with laptops?

How realistic is it to organize a community in Kiev that is completely self-financed?

At the same time, it’s hard to say when the percentage of local money at budget organizations will be 100. But I would like to give an example: recently several Jewish youth initiatives have arisen. These are organizations which work completely at their own expense. Furthermore, they gather money and hold regular charity campaigns, and help people in need and sick children. The new generation tends to provide for themselves and give a little to others. The trend exists, and this is pleasing.

Recently the 74th anniversary of Babi Yar was commemorated in Kiev, and conferences and roundtables were held about the issue of preserving the memory of this tragedy. Why has nothing been built yet? The Jewish community had plans to do so. You can tell us this story in the first person…

This is not the first time I have discussed this topic with you… You know that at one time I was involved in the well-known project of the Jewish community center in the Babi Yar district. This was in 1998-1999; at that moment we, the representatives of Jewish organization of the city, were invited to a meeting on a very important issue. The meeting took place in the “Podsolnukh” community center, which was once on the first floor in the building of the Solomonov University. A respectable group gathered there, and the rector of the university Alexander Ilich Rozenfeld was present, a person with a deeply analytical mind.

A large map was placed on the table, from which I concluded that something was amiss. We began to discuss the idea of building the center. We were somewhat surprised, because you understand, this is a complex place. But on the other hand – the idea of organizing a place for commemoration, study… The organizers of this project spoke very well, they really only had good intentions. But suddenly Alexander Ilich commented: “Couldn’t we move it to another place? It’s rather painful here…” He simply expressed his personal opinion, but many years have gone by, and I still remember it. Everything in the end returned to this phrase. There were terrible conflicts about the issue, and a lot of time was wasted…

Perhaps 75 years is not enough time to take such responsible decisions… Mathematicians have the concepts of necessity and sufficiency. I would put the question like this: what needs to be done so that this place is a worthy memorial of the people who were killed, and what is sufficient in order to immortalize this memory. But it is impossible to answer the second part, I think that not enough time has passed. But we can and must answer the first part of the question.

It is important that the Jewish community come to Babi Yar every year not on the 29th of September, but before Yom Kippur, by the Jewish calendar. This year we went there on the 22nd of September, and held a small rally. A fence must be built, because during our rallies athletes often run past, who simply train there. We certainly don’t think that they don’t respect us, they only know that it is a park. Mothers take their babies for walks in prams there. To be quite honest I don’t know whether this is the best place to take a walk. I don’t think that many people would take their children for walks in cemeteries, at least I wouldn’t.

I repeat, we must build a fence. And we must write on it in big letters “This is a place of executions”. When it is fenced off, when these warning signs are hung up, then this draws people’s attention. People won’t just go there for a walk. This is what needs to be done now. As I know from my colleague, the head of the National historical memorial sanctuary Babi Yar, Mr. Glazunov, today there are around 25 monuments and memorial signs in the place of the sanctuary. Of course, we need to check which of them fall within the officially designated boundaries., but if there are already 25 memorials, perhaps that’s enough…

But nearby at 44 Melnikova Street, there was a Chevra Kadisha. It’s a complex situation, it’s the subject of a court case at the moment. This building must be given to the sanctuary by a decree of the Ministerial Cabinet. Incidentally, there is a decree by the Supreme Council of Ukraine, which is examining this issue. The building must be handed over. There is sufficient room inside to hold a decent exhibition about what happened there. With modern electronic technology, not a lot of space is required for this. We have powerful forces in Kiev, major specialists who can make this museum of a very high quality.

It’s possible to do everything without enormous financial investments in dubious buildings. I would say that we should do the things that are of no cause for doubt in society. There is the concept of consensus…

In this scenario, we will give the next generations the right of choice, the right to take decisions themselves. On our part, we offer a base – a fenced-off territory and a pilot version of an exhibition with its own space. So, I repeat, I propose not to build anything, not to waste money, nerves or effort…