Rabbi Elisha Henkin: the Almighty was the first Zionist 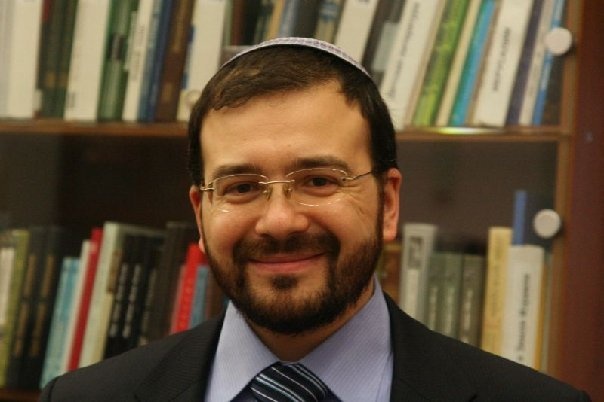 Elisha Henkin is a teacher and rabbi, and the director of Midrasha Zionit. Before Aliyah in 1997 he was an activist in the Jewish student movement in Ukraine. He lives in Israel.

The Midrasha Zionit education network was founded in 2002 on the initiative of the Jewish Agency, with the goal of Jewish education and disseminating the ideas of Zionism in countries of the former USSR. Over time, Midrasha Zionit became an independent international organization, although the Jewish Agency still supports the Tekhelet education camps created by Midrasha, both financially and professionally in preparing programs and training organizers.

What is Midrasha Zionit? What goals does your organization set itself?

Midrasha Zionit was born as a local community project. Today this organization is a full international association. We have offices in Kiev and Israel, and we’re represented in the USA – we are trying to grow.

Since the return of the “Beit Yaakov” Galician synagogue to the Jewish community of Kiev, the Midrasha Zionit education center has worked there. On Shabbat you can take part in prayers and meals here, study and rest. The main working day of this synagogue is Sunday, when lessons on Judaism and Hebrew are held, and activities with children and youths.

At the same time, we have always said that our priorities do not include the goal of building a community here, as a true Jewish community can only exist in Israel. We have even introduced a new concept – “a community in transit”.
In 2008, we created a new project called Tekhelet, which was focused on working with youths and educating a new generation, which would take on responsibility for the destiny of the people and would be focused on Israel. At that time, many other Jewish initiatives had closed down, the crisis had also affected Jewish life. We gathered young people and united them around the idea of religious Zionism. Under the Tekhelet brand, we hold international camps, seminars, Shabbatons and other events.

The task of Tekhelet is to bring participants into the system of Jewish concepts which is based on the triangle “The People of Israel, the Land of Israel and the Torah of Israel”, to help participants make a transition from a passive, sympathetic position to active Jewish national, cultural and traditional life.

Our main goal is to return the Jewish people to Israel, the country where this people appeared and lived, and from where they were exiled. Herzl was not the first Zionist, the first Zionist was the Almighty, who gave us the Torah and said: “You must go”. All our wise men and prophets, teachers and rabbis in all generations said that we must return to Israel. There are communities which have erased the mention of Israel from the siddurs. What happened to these communities? They ceased their existence within the Jewish people. The same thing happens to Jews who say that Israel does not have special value for the Jewish people. These people will disappear from Jewish history, they will vanish. So we want everyone to return to their own country and feel at home.

In recent years we have developed a major project in Israel that includes seminars, excursions and other events. We see that the educational process that we began in the diaspora cannot end there. A huge number of people move to Israel after our camps, but this is not the end of our work, this doesn’t mean that we have carried out our task in full.
The educational process must continue.

Today we are already planning a project for the second generation of Russian-speaking Israelis – children of the people who repatriated in the 1990s.

What assistance does your organization provide to the Aliyah process?

In this sense, Midrasha is not the organization that brings people to Israel. This is the direct responsibility of the Sokhnut Ukraine branch of the Jewish Agency.

In Israel we have a minimum program and a maximum program. The first is continuing education. The second is creating a flourishing Israeli society, a Jewish atmosphere, providing moral comfort for our people. We want the new repatriates to exchange experience, even on an everyday level – at the first stage this is a great help.

I-GPS Shabbatons (monthly seminars on Saturdays) are held in various parts of Israel. Participants have the change to learn, play, meet interesting people and spend time in a welcoming and friendly group. There is always an excursion on the way to the seminar venue.

Additionally, we want to create a joint experience for participants of Midrasha Zionit who have moved to Israel. Our task is to give these people a feeling of a Jewish home in a new place.

Tell us the story of your repatriation to Israel.

I made Aliyah in 1997 from Mariupol, where I had worked for three years as the director of a Jewish youth club, which I had opened. My Jewish life in a sense began with madrich activity, I worked as an organizer at the Sokhnut Ukraine branch of the Jewish Agency.

As for my childhood, my first encounter with Jewishness took place with the help of a class magazine where my nationality was indicated as “Jewish” next to my surname. This was at primary school. I went to my father to ask him about my Jewishness, but my father replied that we weren’t Jews at all, we weren’t familiar with this culture, language and so on, so we were Russian. I went to the school, took the magazine, crossed out the word “Jew” and wrote “Russian”. That didn’t help – next year the word “Jew” appeared next to my name once again.

Despite this, in the early 1990s I went to study Hebrew at courses in the community. Only old people attended them. I met young people who were older than me at various apartments, and we celebrated holidays. Jewish life was not too attractive there, it was different, it smelt of old books.

Once a person attended a meeting of this community and said that not far from Mariupol a Jewish camp was being held. I didn’t believe him to start with – how could there be a Jewish camp, this was the early 1990s, the press hadn’t mentioned it and no one knew about anything it. But I went to find out what it was, and what I saw attracted me.
The atmosphere there was absolutely different, it didn’t smell of old books. It was the youth camp of the Ezra movement, and there were young and interesting people of my own age, and most importantly they were happy!
The encounter with this Jewishness changed my life, I realized that with these people I could and must move to Israel. Several months later I opened a youth club, became its madrich and director, before the Sokhnut Ukraine branch of the Jewish Agency officially came to Mariupol, and in 1997 I repatriated.

Did a lot of those people leave?

Yes, many of them. I believe hundreds of people attended my club. Thank God.

What can assist a new repatriate to integrate into Israeli culture?

This really is a very big task, which we try to solve with our activity in Israel. We see the nature of the problem, we see that many people, even those who have served in the army, do not understand certain social processes.

We hold the “Face to Face” project in Kiev. The idea of this project is that Jewish and non-Jewish points of view are encountered at a meeting about a certain topic. We want to open this project in Israel as well. Within this project, we will talk about various internal Israeli positions, explaining certain Israeli realities to Russian-speaking Jews. For example, why giyur is important or not important, or why relations with the Arabs are the way they are now.

Face-to-Face is an informal educational project of Midrasha Zionit in Kiev. Cultural figures, teachers, businessmen and journalists, public figures and politicians speak to the audience. They raise important issues relating to public and historical topics, processes that take place in Ukrainian and Israeli societies, and the future of the peoples.

I must note that among the participants of Midrasha Zionit, there is practically no one who has returned from Israel to countries of the former USSR. Our participants feel themselves to be Jews, no one ever calls them Russians in Israel, they have a Jewish mentality. They feel that they are a part of the Jewish state, builders of Israel.

Unfortunately, we cannot invite all Russian-speaking Israeli Jews to our camps or seminars, but education is the only way to solve this problem. Ideally, people should familiarize themselves with Israel, its culture and traditions before Aliyah.

How can Judaism be made more comprehensible to outsiders, so it doesn’t frighten them away?

The synagogue today is not a place where young people are eager to go. Because at the synagogue they say the Galut Jewishness that they want to escape from, a place that you pay to attend. So we try to hold youth events outside the synagogue.

The synagogue in Israel is quite a different place, with different functions. People ask me why Saturday meals are not organized at synagogues in Israel, as we do here. I reply that everything here is different, there are always families that invite people to their homes, and the synagogue is less frightening, all sorts of people go there to pray, including young people.

People need to be told about Judaism in a simple but profound way, not just with stock phrases. This is the approach that we have at Midrasha. A person comes to us, and we don’t ask them whether he has put on tefillin today, and we do not wrap them around his arm right away. Why not? Because an understanding of the importance of the commandment of tefillin must come from another place, it must be conscious, not by someone else’s order. A person must understand themselves why and how it happened that the commandment of tefillin became so important.

The same goes for the mezuzah. Many people mistakenly believe that a mezuzah is a talisman, and only hang it up for this reason. But you must understand the depth of this symbol, its reasons and its significance.

This is why we favor intellectual discussion with young Jews, and an honest explanation of the connection between the individual and the nation. A person must understand how they are connected with the tradition and culture of the nation, and what this connection gives them.

Many graduates and participants of Midrasha have moved to live in settlements in Israel. How suitable are settlements for the lives of new repatriates?

As we all grew up in cities, moving out of a city is very difficult for many people. You need to get used to life in settlements.

But at the same time, the settlement is the fullest form of community. When you are happy or sad, you are not alone, you have friends and neighbors nearby, with whom you pray in the synagogue and go to the swimming pool. These people are always near you, this doesn’t happen in big cities.

A settlement is among nature. These are biblical landscapes, the places our forefathers saw. I live in Shilo, in the first capital of Israel, from my window you can see the Shilo plain. It’s very beautiful and at the same time has an ancient history.

I tell my guests that on the 15th of Av the entire people came here and danced, it all happened right here. You don’t get this in cities…

We tried to create a program for young people, and gave them the opportunity to live in settlements. Of ten families, two chose to live in these places, while the others preferred the more familiar format of cities. Evidently it’s a matter of habit, or they followed the suggestions of their relatives..

// See here more detail about the process of repatriation to Israel //